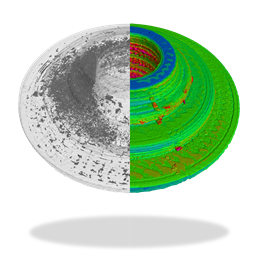 New metal Additive Manufacturing technologies on the rise
Starting out mainly as a prototyping technology Additive Manufacturing (AM) gained tremendous momentum for use in industrial applications over the last 5 years. For highly demanding functional parts, laser beam powder bed fusion (LB-PBF) became the most dominant AM technology. In the past two years, binder jetting technology (BJT) and fused deposition modeling (FDM) of metal components raised end user expectations to enable new applications by massively reducing cost. This claim has been fueled lately by large US companies such as HP, Desktop Metal and Markforged.

In the now published study, Ampower presents an objective and independent view on the current capabilities of sinter-based AM technologies compared with LB-PBF and metal injection molding (MIM). By analyzing over 50 specimens from 8 different system suppliers, Ampower is revealing the characteristics of the different technologies. The comprehensive computed tomography (CT) analysis in cooperation with YXLON provided deep understanding of the geometrical accuracy and internal defects of the different technologies.

A major challenge in Additive Manufacturing is the density of the parts. All metal AM processes have in common that voids and internal defects can not yet be detected during the 3D Printing process. Destructive testing only reveals defects on the tested parts. In highly regulated industries such as Aviation and Medical, NDT is necessary during development and in some critical cases even as a 100 % testing method during production. In the current study, Ampower partnered with YXLON to evaluate the technology readiness of state-of-the-art 3D Printing processes such as LB-PBF as well as new rising metal technologies.

Porosity analysis
For validity of porosity analysis, the quality and resolution of the computed tomography (CT) image has to be considered. Pores below the resolution may not be detected by the scan. The quantification of porosity is based on a threshold value that maps the gray scale value to solid material or voids. This value significantly influences the measurement result. The comparison of computer tomography images of BJT, metal FDM and LB-PBF with same scan parameters reveals a higher pore distribution as well as larger defects in the BJT and metal FDM parts. This correlates with the results from the micrograph analysis. 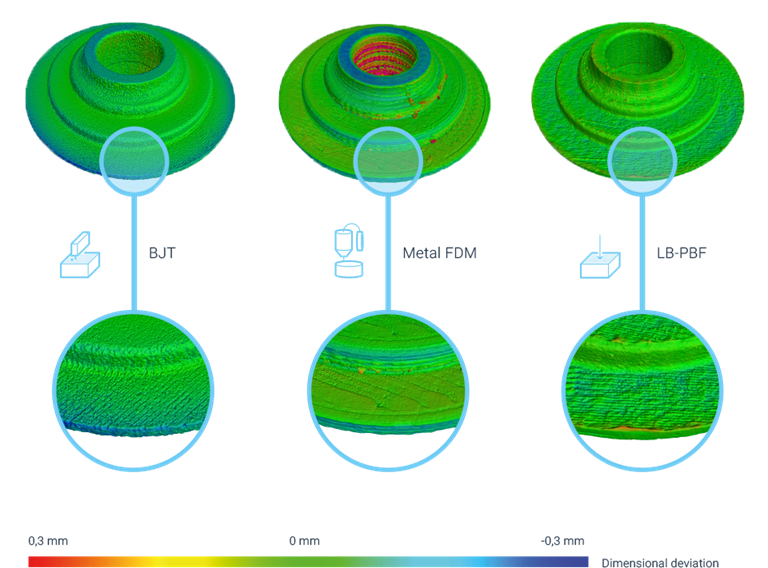 Geometrical accuracy
The results of sinter-based AM parts show distortion around the outer ring which are most likely caused during the sinter process. Excess and missing material on the flange influence the dimensional accuracy negatively. This is especially prevalent for the metal FDM part. The high-resolution CT scan allows the depiction of the characteristic surface structure of the different AM processes. For all technologies, the specific vectors of material addition during the 3D printing process are clearly visible on the surface.

Further study insights beyond NDT
The study closes with a deep dive into the design potentials and limitations. The greatest challenge of sinter-based AM technologies is the debindering and sintering process. To control these necessary process steps, a profound knowledge of sintering is required. Implementing sinter-based AM technologies will present new challenges to early adopters. Especially the investment in infrastructure and knowledge about the sintering processing should not be underestimated. For automotive and machine industry, binder jetting technology and metal fused deposition modeling offer great future potential. They will cover the gap between casting and LB-PBF regarding cost and productivity. When it comes to highly loaded applications, however, EB- & LB-PBF will remain the reference AM technologies for now.

Read the full study in English!