Digital radiography is a form of two-dimensional x-ray imaging in which traditional light-sensitive and radiation-sensitive x-ray film and analog hardware have been replaced ...

Digital radiography is a form of two-dimensional x-ray imaging in which traditional light-sensitive and radiation-sensitive x-ray film and analog hardware have been replaced with a digital image capture device, usually consisting of a flat-panel detector, and computer-based equipment. The detector captures the images. The computer controls the operation of the system and manages the image acquisition in real time. Then it allows enhancing, processing, archiving and transferring the captured images digitally. Three-dimensional images are only possible using computed tomography (CT) technique, detailed information on this subject is available in the YXLON CT Handbook.

In addition to reducing the time and expense required to capture usable images, DR requires less radiation than conventional x-ray techniques with film to produce an image of similar contrast.

X-rays are generated when fast electrons are suddenly slowed down or change their direction. In an x-ray tube, electrons are released from a cathode, in this case a filament, and accelerated by the high voltage between the cathode and the andode. The anode at the other end of the tube decelerates the electrons with the result that they emit energy in form of electromagnetic waves – the x-rays. (Please also refer to page 9 ‘micro-focus and mini-focus x-ray tubes’ ). They partly penetrate the object to be examined and are captured by a digital detector. The detector converts the invisible x-rays into digital signals that form the image.

The density of the material is part of what determines how the x-rays pass through the item being scanned. Very dense or thick material is displayed as dark in the x-ray image, while cavities are brighter. While conventional digital detectors with 8-bit quantization can display 265 shades of gray, modern 16- bit detectors can display 65,535 shades of gray. The images are always two-dimensional and the respective field of view is limited. When 3D volume is required, it can be reconstructed from hundreds of 2D x-ray images. 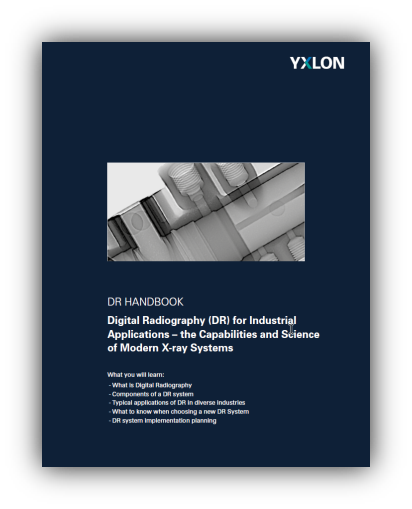